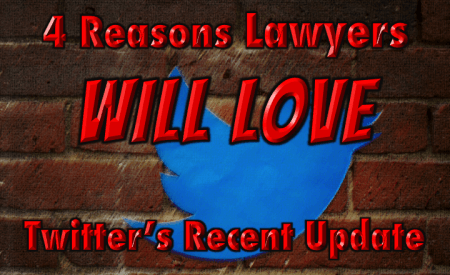 This week, in a part of a long-running campaign to make Twitter more accessible to new and less-experienced users, CEO Jack Dorsey announced a series of changes that will be put in place over the coming months (to give developers time to adjust). All of the changes, at least in part, are being implemented to make sure that users don’t have to shorten an already short message based on the content of the message. Here’s what’s changing:

When you replied to a tweet, the username of the person you were replying to was automatically included at the front of your tweet – reducing your available space to reply.

When replying to a Tweet, @names will no longer count toward the 140-character count.

Carrying a conversation among multiple users now much more practical.

Well, this one benefits pretty much everyone, from the complete noob to the most experienced Twitter… kingpin? Replies (also known as tweets that begin with at least one username) will no longer count the characters in the username against your limit. The most basic benefit of this update is that a simple reply allows 140 characters, rather than being slightly reduced by an amount dependent on the username of the tweet’s author.

The more advanced users will see an even greater benefit – no longer need to worry about limiting character count when adding multiple people to a Tweet. This update will be incredibly helpful for lawyers who use Twitter as a conversational tool, and want to have a conversation with more than 1 person at a time. Yes, it’s still Twitter, and you still only get 140 characters per Tweet. But before, if you wanted to add three other users to a reply, your tweet would be limited to like 19 characters, which oftentimes created the need for what was essentially a “Tweet Storm,” making being attached to those conversations a royal pain in the ass.

Now, with full-length tweets unaffected by the number of people mentioned, you can use the full 140 characters to actually communicate your message. This update, while useful to everyone, is clearly designed to make the user experience more transparent and consistent for new users. Early on, I found that I avoided conversations that had multiple users listed because trying to get my message across in snippets of 19 characters was just too much work.

You’d craft the perfect tweet, only to remember that you have a great image to attach that’ll make it even better. You add the image, and now you’re suddenly at -6 characters available for your tweet. Yep, media attachments (images, movies, GIFs, etc.) all took up some of your character count.

Once the update is complete, you’ll be able to add media (images, video, GIFs, quoted tweets, and Polls) to your tweets without it impacting your available space to comment.

Using media in Twitter is easier and more accessible.

There is very little in social media marketing more powerful than the right image. Posts with images and videos are considerably more likely to be opened, replied to, and retweeted. That’s why you should be using images and video in your tweets. This update creates a much more consistent environment when tweeting, particularly for those who aren’t necessarily interested in crafting a message whose length is primarily based on whether an image is included.

This change will benefit two types of users – new/inexperienced users and knowledgeable marketers. In fact, of all the updates this month, this one probably provides the greatest benefit to the very low and very high ends of the Twitter experience range.

Like most of the updates on this list, the transparency and consistency involved in this update is a no-brainer. New users now don’t have to adjust an already limited message into an even smaller one just because they want to add media. Users with limited experience are not going to pre-plan their tweets as often (or as effectively) as more experienced users, and this change means they won’t be forced to do so when they decide to add an image at the last second.

On the other end of the experience spectrum is professional or knowledgeable social media marketers. How will they benefit? Well, two ways, really. The first way is probably similar for most generally experienced users – even if they’ve gotten good at writing tweets in less space, having a few more characters can be nice. Like Reggie Miller said of moving the NBA 3-point line closer to the basket: I’m good now, I’ll be even better a little closer in.

One way that the truly experienced marketer will benefit, though, is through restraint. Many marketers are likely to use this update as a sign that they need to include media in every post. While studies show that image posts tend to receive more attention, it’s not universal or conclusive. Less-experienced marketers who flood their feed with images will actually provide an opportunity to the most effective Twitter marketers to diversify their posts.

Old tweets can be re-published if relevant or to share new reflections.

This update is going to be most useful for the more experienced users, particularly those who are (or seek to be) thought leaders in a particular area. Used judiciously (to avoid looking like Donald Trump – the first serious contender for President of the United States who refers to himself in the 3rd person), this feature has a lot of uses.

You’ll be able to tweet and quote your older posts, allowing you to “re-publish” older material that may be relevant to current events. You can share new reflections on your previous thoughts/ideas/posts. You can re-tweet key business or brand messages. Or you can even re-push out a message that might have been sent at the wrong time of day (or at the wrong age of your Twitter account, back when you only had 4 followers).

A lot of people will ask why this is a big deal, as though the only reason to quote yourself is to actually become that pompous jackass you’ve always aspired to be. While I do expect it will be used some for that, you can’t ignore the benefit this update will have for marketers or users interested in tracking the metrics of individual tweets! If you have to re-write and post a tweet, comparing its success to the old tweet is likely to be incredibly difficult. By quoting or re-tweeting, you’re essentially bundling them together so they can be quickly and easily located, and the information contained therein easily analyzed.

Like I said, this feature will primarily benefit the more experienced users. Oh, and just like with the media attachments, this one should be used sparingly!

If you started a tweet (or a reply) with a username, it would only appear to other users who follow both you and the user you replied to. In order for everyone who follows you to see the tweet, the username in the reply had to come somewhere after the first character, leading to the adoption of the “.@mention” as a workaround.

All original tweets, including tweets that begin with the username of another user, will appear for all of your followers. However, if the tweet is a reply, only the first reply in the conversation will be visible to all users.

This one is a no-brainer for most people who’ve ever used Twitter. Initially designed so that people not involved in your reply-message chain wouldn’t have to see your whole conversations in their feed, this particular mechanism needed to go. Many, many, MANY new and inexperienced users never knew that their replies weren’t appearing on their followers’ feed, and never understood why people would start a tweet with a period.

There is no question that this particular update is about making the process more straight-forward to new users. However, one commentator has suggested that there will be another ancillary benefit to this update:

Plenty of brands have taken advantage of the relative obscurity of the ‘Tweets & replies’ tab in order to tag relevant (and sometimes not-so-relevant) users at the beginning of a message to draw eyeballs to their account (usually in the hopes of prompting users to hit the ‘Follow’ button).

Now, brands that have been using the @names mention tactic to call attention to themselves or grow their following will be exposed to all of their followers.

Once the update goes into effect, if brands were to use the same tactic, the Tweets would flood their main feed, create a Tweetstorm, clutter followers’ feeds, and likely prompt numerous unfollows.

A message for some less-marketing-savvy law firms?

The Unanticipated Consequences of Twitter’s Update

There are always consequences that aren’t generally foreseen, but one interesting comment that I saw pointed out that by allowing users to combine images, videos, polls, replies, and retweets WITH their full 140 characters, a lot of marketers’ time-tested and proven strategy for their tweets that needed to contain fewer than 140 characters is now useless.

In fact, one major marketing strategy was to never tweet more than 120 characters if you wanted anyone to reply or retweet, leaving enough room for your username to fit. All of that advice is no longer applicable.

So guess what that means… a lot of you new and less-experienced users are, for a short time at least, on the same page as your more-experienced counterparts when it comes to Twitter strategy.

Make the most of it!