10 Innovative Ways to Destroy Your Lawsuit with PowerPoint 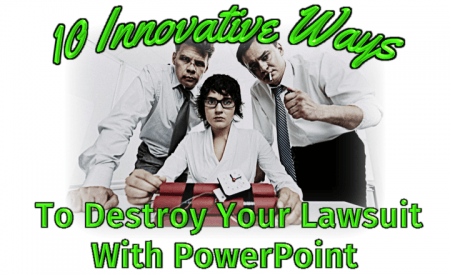 Sometimes, you just can’t take it anymore. Your client has had WAY too much of a good thing – meaning your service as their lawyer. The case has gone superbly, and your client, whom you loathe, is about to reap the rewards of your work.

At least that’s what I’m left to assume as you conclude your closing argument. You had done splendidly up to that point, putting on all the evidence you needed to support your case. You even made your tyrant of a client (I’m assuming, remember) look amazing on the stand!

You stood up to give your closing argument – even ignoring the judge’s ridiculously calling it your “summation,” (I hate it when they call it that, too) – ready to rock. It was clear that you’d chosen this moment to detonate your client’s case. This was the moment you broke out that miraculous piece of hell-ware known as PowerPoint.

Here are 10 Innovative Ways to Destroy Your Lawsuit with PowerPoint:

1) You prepared your PowerPoint Presentation last week, and never even thought to update it.

Sure, you’re a busy attorney, so it’s possible that you didn’t actually do this on purpose. However, I’m assuming that you take your technology competence at least as seriously as the color coordination of your belt and necktie, so I’m going to assume that this was really just a cover.

Your PowerPoint presentation included several slides that you had to run back to your computer and advance through. Why? Because they contained evidence that the judge ruled was inadmissible. This was a stroke of genius on your part – even if you didn’t look bad enough to lose the case, there’s a chance that the judge will simply declare a mistrial! Win-Win!

Oh, and that part where you had a bunch of bullet points about the testimony that had been presented, each one of which was partially incorrect because the other side’s expert admitted an error during your stunning cross-examination? Your PowerPoint presentation was brutal to watch at that point – an act of ripping defeat from the jaws of victory so grotesque there’s no way you’d have allowed that to happen by accident.

Really, it takes some guts to leave in all those inaccurate PowerPoint slides to make sure you lose, but the way you acted like you were seeing them for the first time each time they appeared was exciting to watch. You really gave the jury the feeling like we were all a part of the surprise.

It actually helped that you were reading each slide, word-for-word, because when you got about halfway through that slide about how the credibility attacks against your client weren’t that damaging – only to realize that information hadn’t even come out during trial – totally added to the drama. It was spellbinding. 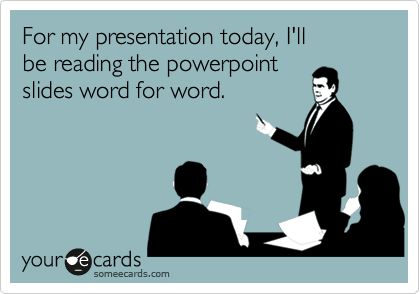 You really added to the authenticity with your sprint back to your desk to advance to the next slide, too. Everyone in the courtroom was impressed by your agility.

3) To demonstrate your tech prowess, you animated EVERYTHING

How good were your animations? Well, I’ve never seen PowerPoint animations trigger an epileptic seizure or cause so many people to actively campaign for barf-bags during a closing argument. That’s like the measure of self-destructive success! You must really hate your client.

The best part was when you had the clip art image of the doctor spinning right in the middle of the screen… and left it spinning for five minutes while you and opposing counsel were called up to speak to the judge. And then let continue spinning for another few minutes after your closing resumed!

It was hypnotic. I don’t even remember what you said for several minutes afterward. You didn’t command me to do anything embarrassing, did you? Hopefully nobody passed out, but there is unexplained drool on my shirt…

4) Proving your extensive vocabulary to the jury, you loaded your PowerPoint slides with text

You’re obviously familiar with the term “burying the lede,” because you did it phenomenally. If there was a point even remotely related to your case to be found in the Greater Works of Shakespeare that your slides turned out to be, I couldn’t find it. No doubt the jurors had the same problem. 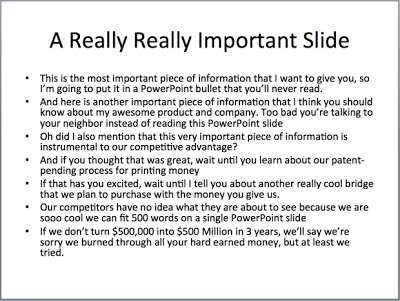 On the other hand, the frequent use of grandiose terms and legal jargon was particularly impressive. You made sure that the jurors noticed that you had to slow down and sound out each one as you read them, just to demonstrate that you didn’t care enough to prepare. They knew the words didn’t matter, but I think by this point even the jurors were amazed at your formidable attempts to crush your own case. 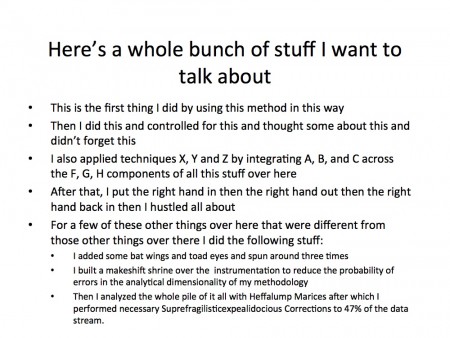 Jurors know that the makeshift shrine was critical to your case.

Either that or they were busy rubbing their heads because you gave them words in a font best suited for a neon sign on the Vegas Strip, but in a font size that newspapers can’t match. There was NO way anyone who saw these slides was going to get anything meaningful out of them… other than a migraine. 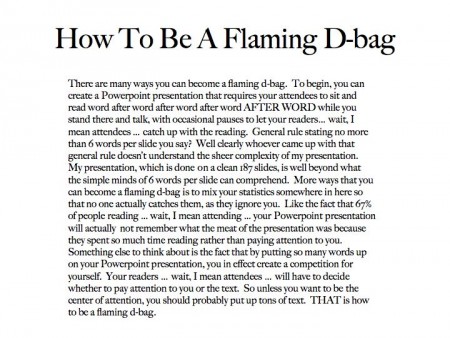 A wall of text: guarantee that your audience remembers neither what you say or what they read!

5) You made extensive use of the built-in page templates… one for each slide!

Trying to be subtle about your complete and total undermining of your client’s interests can be difficult. Sure, it’d be easy just to make some really horrible slide background that either looked like an Andy Warhol exhibit or a Rorschach Test, but that’d give you away!

Kudos to you for finding a sneaky way around that problem! You realized that the built-in templates have the veneer of professionalism, but when different on every single slide, they look terrible. That dedication to sabotage wasn’t lost on me, even though it probably even looked somewhat professional to your client.

Even if not, you’ve got some plausible deniability, because why would Microsoft include those templates if they weren’t professional?!?

Another subtle trick you pulled here, my friend! You’re totally aware that we’re a visual society, and that we like to relate images to messages. I’m sure that’s what you told your client when they asked why you had six different clip art images on each slide. Sure, they didn’t all make sense, but… SCIENCE! 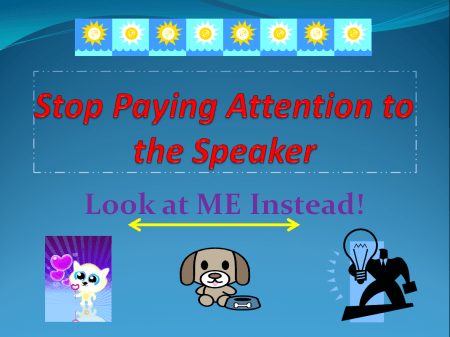 Oh, and having each of them enter the screen through animations that took between 2 and 5 seconds per image was a stroke of delay genius. Not only did it prevent you from accidentally getting into a rhythm that might result in a “good” or “not incompetent” closing argument, you completely distracted the jury from anything else.

The best part was when you inadvertently made a really good point about the credibility of the opposing party, but instead of the jury actually seeing them shrink in their seat, they were busy watching your images spin, blink, bounce, and fly off the screen for a solid minute.

You really were killing it on the “plausible deniability” thing. I’m sure that your client was pissed after the trial, shouting about how you left things out during close. All you have to do is show them that one slide where you put all the information about the entire case. 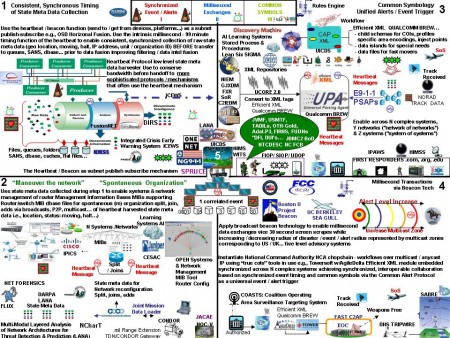 You talked about this slide for a good 3 or 4 minutes, but I don’t even know if I heard what you were saying. I was busy trying to figure out whether the shape you used to connect all of the evidence was a dodecahedron or some sort of hidden pentagram. Then I remember how much fun it was trying to find satanic lyrics in songs played backwards. Then I thought about the Beatles, and how terrible it was that John Lennon was shot and George Harrison wasn’t allowed to write songs earlier in his career…

Then I realized we were still in trial. It worked perfectly. I don’t know what was on the slide, and I have no clue what you said. But if your client asks, you can point at that slide and say, “see, it’s all here!”

8) You used the fancy transitions between your slides, and sampled from all available options

One part of the presentation I loved was when you made it look like you were that one guy at a party who argues that Michael Bay is a great director, who uses incredible acting, depth of character, and nuance to get the most out of a scene.

I’m talking, of course, about the cinema-quality transitions you put between each slide. You’ll tell your client that it makes the presentation look better and more professional, but you know that it’s like the explosions in Transformers – there to distract. In this case, to distract the jury from the few good points you’re making.

I particularly like how you used different ones each time. After the fourth slide, I was practically cheering for you to go on to the next slide so I could see which transition you were going to use! I could tell you were feeling it too, because you actually were pretty giddy about watching each transition when it happened.

Or you were just preparing to read the new slides, as discussed in #2.

9) Proving your ambivalence towards “custom” and “tradition,” you elected to forego using spellcheck

This one was not one of your more subtle tools when it came to undermining your client’s case. However, I can see how you’ll cover for it:

So while you might have caught more flak for this one than some of the other issues discussed above, you had some explanation. Plus, this is the type of problem that really gives you bang for your buck, so to speak! You know how much juries hate lawyers who seem unprepared. By having so many spelling errors, you looked both unprepared and unprofessional.

From the looks on the jurors’ faces, your plan worked.

10) Your PowerPoint presentation ended with cringe-worthy comments about “having the power,” set to Stan Bush’s 1986 “You’ve Got The Touch.”

As your presentation ended, you found yet another quiet way to completely undermine your client’s position – you got corny. What an easily defendable thing to do: you were only encouraging the jury to do what was in their hearts. Who doesn’t love the idea of telling the jury that “You have the touch, you have the power!” I just wish you’d played the video:

The line was so cheesy that you could actually feel the room shift from collective eye-rolling. It was great. My one suggestion is that next time, go for the gold, and tell them that every move they make, every breath they take, you’ll be watching them. 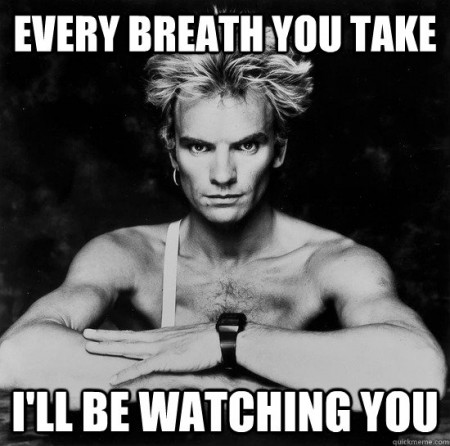 This really belongs in the jury’s mind when they think about you.

Amazing work. You completely demolished your client’s case, one that was almost assured of a win. You took strong legal arguments and made them look childish. You made points that were unambiguously clear into muddled, ambiguous nothings. You caused the jury actual pain (with your animations and microscopic font size), and you made the entire courtroom uncomfortable by how you ended.

You must really hate your client.

Or I could be giving you too much credit. You could just be really terrible at PowerPoint.