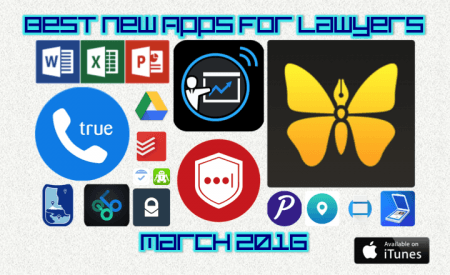 Spring has sprung… unless you live in the northeast, where it’s apparently shrunk back into its cave, awaiting better weather. Regardless, with the flipping of the calendar page we go from March to April, as the most exciting month in sports – March – gives way to the sleepy, almost punch-drunk beginning of baseball.

March was fun in other ways too, most notably for ABA TECHSHOW. I was honored to join Jeff Richardson of iPhone JD, Tom Mighell and Natalie Kelly.

It was a great time and a well-received presentation:

Excited to see how VR might help law students practice for trial classes or moot court in the future. #ABATECHSHOW https://t.co/CbQTk0lRGF — Will Harrelson (@willharrelson) March 19, 2016

Anyway, enough about my month, here are my best new apps for lawyers released in March 2016:

Multi-platform apps begin at the (1:48) mark of the podcast.

Even before the Apple v. FBI issue brought the security of mobile devices to the top of the news cycle, this year’s ABA TECHSHOW was already planning on making sure that security and encryption were front and center. As it should – we lawyers have an ethical duty to preserve our clients’ confidential information, and encryption is one of the best ways to do so.

However, one of the things that has been roundly lamented is the lack of a good email client containing end-to-end encryption. Messaging and phones are all encrypted, but email has been passed over… until now. ProtonMail, created by MIT and CERN scientists following the Snowden revelations, has come out of its two year-long beta and is available to the public.

It uses end-to-end encryption, and you, the user, controls the encryption key. Yep, that means that just like with Apple, ProtonMail employees won’t be able to read your encrypted emails.

One of the best ways you can keep your online accounts secure is by using multi-factor authentication. At its most basic level, this means you’re using a combination of something you know, something you have, and something you are to secure the accounts. Several apps exist to help you with that, like Google Authenticator and Authy. LastPass has also thrown its hat into the ring…

While using apps like Google Authenticator is secure, in order to use it you have to leave the app you’re trying to use, open Authenticator, remember the number (before it changes), switch back, and enter the code. If you’re a user of LastPass, the extra authentication all happens within one app. Yep, more secure and more convenient.

Ok, a disclaimer: the reviews for this app are all over the freaking map. Some people love it, some hate it, but given how interesting the concept is, I decided I’d tell you about it, at the very least.

Logo Foundry is, well… an app for making logos! That’s right, if you don’t have a logo for your law firm (or other area of your life desperately in need of a logo – like the cross-fit version of yourself, for example), you can create one right from this app.

Sure, it’s not going to be the quality you’d get from a professional designer, and might not actually save you that much money. On the other hand, it could give you an idea of what you like, and may actually be right for your particular need.

Do you use a cloud-based storage system for your files? Then I’m sure you encrypt all of those files, right? Of course you do, it would be silly not to. So, one more question – do you wait until those files are already uploaded to encrypt them? Guess what, most of your services do, meaning that those files can be intercepted before you even get the chance to encrypt them.

If you don’t think that’s a big deal, then you’re actually in the crowd that needs this app. Because you’re probably the type that thinks Starbucks WiFi is secure.

Cryptomator solves that problem by encrypting your files before they go to the cloud. Using 256 bit encryption, Cryptomator works for most cloud-based storage solutions like Google Drive and Dropbox, and has an Android app on the way.

Finally, the incredibly popular “distraction free” writing app Ulysses has made the voyage from the Mac to iOS. Featuring cross-platform synchronization, Spotlight integration, and iPad Pro compatibility for split view and slide over, Ulysses is also 3D Touch Enabled.

As a bonus, the mobile version has nearly all of the desktop version’s features, including dark/light writing modes, writing statistics, goals, tools for Markdown, annotations, and the ability to add pictures, links and notes to text. Probably the most useful feature for lawyers who enjoy writing on Ulysses, you can now import text directly into either the desktop or mobile version of Ulysses from Microsoft Word.

Overall, I love this app on desktop, and I’m psyched it’s now available on iOS, particularly with such a fully-featured version.

The real upgrade is pretty impressive. Scanner Pro now has even better color processing and features that make it considerably easier to scan open books and magazines (seriously, how many times have you given up scanning out of a Federal Reporter because of the curve on the page?!?). Additionally, you also get built-in text recognition – an excellent update to an already amazing app.

As I’ve said numerous times when reviewing new apps, some of these I talk about because I think you could find them useful. Some, admittedly, are just fun. Others are ones you should know about. This is DEFINITELY in that last category.

Kaboom is a messaging service (that’s an iOS keyboard) that creates and sends destructible messages. You type your message, add any media (photos, videos, etc.), identify the recipients, and send the message. Just like most messenger services. Except this one allows you to set a destruct command. The link to the message self-destructs after a certain amount of time or a certain number of views.

Ephemeral messaging will change the way lawyers go about collecting and discovering important information, so you’d better understand that this one is out there!

Microsoft had an interesting month, capped off by their major product event – during which not a single mention was made of the Windows Mobile OS. On the other hand, Microsoft’s push into Apple and Google’s territory continues unabated. This month, updates to three flagship Office apps clearly take aim at Google’s Android-based productivity apps:

All three updated apps, Word, Excel and PowerPoint, now autosave documents to OneDrive, and can be configured by the user. Additionally, version history is available across all three platforms, allowing users to view or restore earlier versions of a document.

Word: The biggest update to Word is the availability of collaborative editing. Long the key differentiator between Word and Google Docs, Word was for the office, Google Docs was for collaborating. No longer – and given the overall level of familiarity with Word in the legal profession, this is a game-changer. However, it’s early – you’ll likely need to forgive a few bugs.

Excel: The neglected one of the bunch, Excel’s update may be the most limited, but if you’re a formula fan, you’ll like it! Fill handles are now available – automatically fill a range of cells by dragging the handle across the screen.

PowerPoint: PowerPoint for Android now has some additional features found in the new PowerPoint 2016, including designer. You upload a picture, and designer will help create the best looking slide to support it. You’re also able to insert images directly from your device’s camera, and use collaborative authoring.

A “caller identification service,” Truecaller received a massive update to its Android app last month. Originallly more of a spam filter for your phone – great for blocking telemarketers and unknown callers – Truecaller has integrated the dialer features from its companion app, making Truecaller an effective replacement app for the stock phone app.

Additionally, Truecaller now boasts an “availability” feature that lets you know if your contacts – who have also installed Truecaller – are free to answer your phone call. Based on your calendar, and whether you’re currently on the phone, and indicates to others whether you’re free. Another cool feature is that Truecaller will be able to identify people in your call history even if they’re not saved to your contacts list. That is, also, if they use Truecaller.

Hopefully, your law practice has discovered the beauty and functionality of video conferencing. If not, you really should. However, it’s undeniable that you’re missing something with most traditional video conferencing, something that would be incredibly useful for lawyers – a multi-camera perspective.

Sure, you could shell out a ton of money for a tag-team videographer setup, or you could download VideoMeeting+. This app adds much needed flexibility to your video conferencing by turning your phone or tablet into a second camera. Designed to be directly compatible with Skype or Google Hangouts, you can now display visuals like whiteboards, demonstrations, exhibits, or capture the actions of that attorney who doesn’t understand what a “talking objection” is or why he isn’t allowed to answer for a witness.

On the other side, you can combine both feeds into a Dual Video viewer. You’re also able to get freeze frame views, record live video, add annotations, and improve the overall quality of the video through digital enhancements.

Well, it’s always nice when companies create what amounts to artificial conflicts between users of their iOS and Android devices. ToDoist is actually kind of a regular in that club. Universal, my ass!

Ha, ok, enough of that. Last month, ToDoist updated their iOS app to include some pretty great new features, and this month, they’ve brought those features to Android. Most obviously for regular users, ToDoist is sporting a new look, but it’s the features that we’re really interested in.

The best of them is the new Quick Add feature, that allows you to set and manage tasks using natural language. Add a new task, and ToDoist will actually look for dates, tags, people, and more, that might be important to that task. New shortcuts and the ability to name projects using emoji are also now available.