How to Ignore the Experts: Most Popular Passwords of 2015 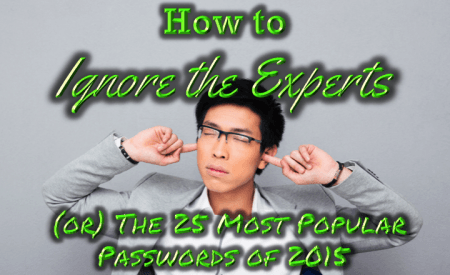 “If I have seen further than others, it is by standing upon the shoulders of giants.”

On the other hand, H.L. Mencken said:

“Nobody ever went broke underestimating the intelligence of the American public.”

Based on the recently released list of the top 25 most popular passwords of 2015, I empathize more with the second quote. The inescapable conclusion: we’re morons.

To understand specifically how I came to this conclusion, let’s begin with this little, uncomfortable fact: 40% of Americans have either had a personal account hacked, been notified that their personal information had been compromised, or had a password stolen. So, with that in mind, you’d think we’d take security more seriously. Or maybe listened just a little to the advice security experts have given.

Every year, SplashData releases its list of the 25 most popular passwords, and it’s always a humbling reminder that although some of our great thinkers might have stood on the shoulders of giants, the rest of us… not so much.

The Most Popular Passwords of 2015:

Here are some of the most popular passwords from last year. For the full list, check out the infographic below:

Yep, you read that right, the end of the list certainly had a timely Star Wars-based flavor to it. Unfortunately, when one fictional character group does well, another usually suffers. Several of last year’s Top 25 most popular passwords had to get bumped off the list, and take a look who dominated that list: 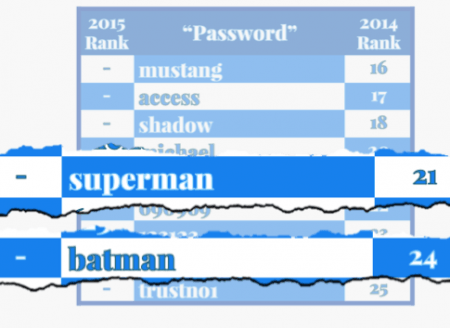 A strong showing in theaters this summer should bring them both back!

I figured that after reviewing that terrible list, it would be a helpful reminder to list several of the top steps that security experts take to protect their information. To demonstrate how terrible we are, I’ve found statistics on how well the “rest of us” do in following those tips.

The Experts’ Most Popular Passwords Tips:

This one isn’t new. Your passwords need to meet a number of different criteria, but some of the biggest involve length, the information used, and a combination of characters. Experts advise that your password should consist of the following:

How do the rest of us do on those? Not well at all: 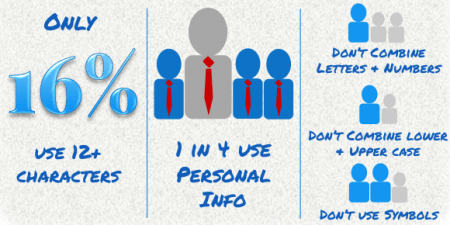 Only 16% of Americans use passwords that include more than 12 characters. One in four of us uses personal information as our passwords, because it’s easier to remember. (It’s also a lot easier to find out.) And the character combination statistics are downright frightening:

Ridiculous. But there’s more. The second thing the experts do is…

Password managers can help to create complex, strong passwords, and they keep them organized. Since the programs usually have a strong password requirement for access and keep their data encrypted, they’re about as safe a place to keep your passwords as possible.

How about the rest of us?

1 in 12. 1 in FREAKING 12! What’s even worse is how the rest of us choose to remember our passwords: 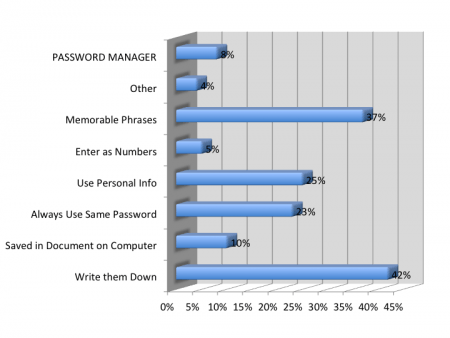 For those of you who “Write them Down,” the Kaspersky study also says you either share it or leave it out in the open for other to find. Dumb.

Know how many of those are secure? Here’s a hint – it’s the one used by 1 in 12 of us. That’s ok, there’s still one additional way that we could improve our passwords… but don’t:

That’s right, most experts recommend that we use a different password for every login. Honestly, it’s probably the best reason why a password manager is such a great idea. So… how do we do?

Were you expecting more? Roughly 1 in 4 of us uses only one password. Overall, more than half the population uses 5 passwords or less… on an average of 24 online accounts.

Check out the full infographic on the 25 most popular passwords from 2015 below: