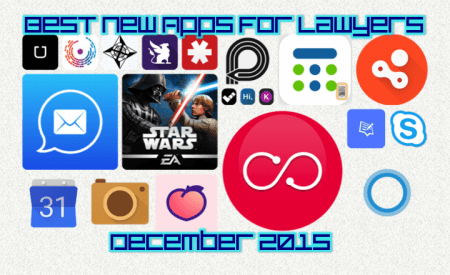 Well, we’ve passed through the “holiday season,” and on into the new year. While much time has been spent recapping the events of 2015 (usually through about December 1 – seriously, do these people think December didn’t happen?!?) and predicting 2016, it’s time to look back on what happened while you were busy shopping.

On the apps front, two important things: First, there were some new ones released, which I’ll get to in a minute. Second, I was invited to speak at the 2016 ABA TECHSHOW in Chicago.

And amazingly enough, I’ve been asked to talk about apps alongside established experts Tom Mighell, Jeff Taylor and Jeff Richardson. I’m truly honored to be included on such an amazing panel, and I hope you’ll attend!

Here are my best new apps for lawyers released in December 2015:

Multi-platform apps begin at the (1:49) mark of the podcast.

Much like the smartphone industry in the US, the use of office productivity systems by lawyers seems to be split into two main camps: those who use Microsoft Office (the majority), and those who use Google Docs (a growing minority). This, obviously, is for those in the second group.

One of the biggest problems with Google Calendar was that, unlike Microsoft Outlook, users were unable to combine task and calendar management on one screen. No longer. The Google Calendar app now lets you add Reminders to your calendar, and allows you to create and view tasks alongside your calendar.

You also get the other, lesser discussed benefits of using Google Docs – the power of Google. If you add a reminder to call your doctor, Google will search your email and online for the doctor’s phone number. The Smart Suggestions you’ve become used to – and that MS Office users don’t even know exist – make this a huge upgrade for lawyers using Google Docs.

As lawyers, we’re in love with the business card. To be honest, this is one of those “non-tech” tools that I actually find quite useful. A small object, containing a ton of important information, that’s relatively cheap to obtain. Sadly, it’s becoming more common that I’m receiving another lawyer’s contact info on torn notebook paper than it used to be.

Thankfully, a new app released last month addresses that exact situation. Blinko is a contact management app that is similar to a business card reader, but not identically. Write down a phone number, website, or email address, take a picture with your phone, and Blinko will call the number so you can save it, send an email (with an appropriate delay), or open the website.

It’s the perfect follow up tool for adding new contacts, especially in those situations where they just didn’t have a business card handy.

As you may know, I dislike Ad Blockers. I also dislike most internet ads, because even if they don’t contain malware, they really mess with your internet experience. Well, your internet experience is being impacted by more than just ads. So Mozilla, one of the most trusted transparency advocates on the web, designed a new solution: Focus.

Focus runs in the background while you’re using Safari, and blocks certain types of trackers and fonts that you select. You can choose to block ad trackers, analytics trackers, social trackers, content trackers, and various web fonts – all or selectively based on your preference. The net result is a smoother internet experience, with greater protections for privacy.

And a much better chance that your internet research will inadvertently reveal client confidences to anyone tracking your searches!

Over the past year, a number of group-scheduling tools like Doodle have become tremendously popular in legal circles. They’re nice, allowing you to get a group of people to schedule a meeting together. But what if you want to be able to handle all of your group schedules in one place, rather than one at a time?

Teamup Calendar is a new app (that connects to the web service of the same name) that allows you to manage multiple CALENDARS – not just meetings – with multiple groups, all in one place. With real-time synchronization, and a full suite of calendar organization tools, you’ll be able to make sure that all of your important events get scheduled properly.

To-do lists are tricky. On one hand, it can be really satisfying to check off items on the list. On the other hand, you have to create the list. Oh, and we can’t forget those lists that despite your best efforts, you’re seemingly unable to ever check an item off (this usually involves federal court).

Proud is a new task management tool that combines impressively beautiful design with the power of simplicity. With options for due dates that are highly specific to more… realistic entries – “later today.” Proud also incorporates the Pomodoro Technique (short breaks to maintain mental awareness) for lawyers lucky enough not to have a boss. (Kidding… kinda).

Proud also offers Apple Watch integration. It’s a very nice looking app, with interesting feature set (similar to Clear). However, I will note that iTunes contains an allegation that the developer was paying for 5* reviews. If confirmed, I’ll delete everything positive I’ve said.

For lawyers who operate primarily from Mac computers, you may be familiar with the Unibox Email management platform. If not, you really should check it out. Unibox organizes your email not by individual email, or even email chain. Rather, your email is organized by sender (or recipient). That way, you’re always able to see every conversation you’ve had with that person.

Well, they finally came out with their mobile app! Now you can manage your email through Unibox directly from your iPhone or iPad. For most lawyers, the most valuable part of having this on your phone won’t be the email functions themselves, but rather the ability to review all of those old email chains much easier than in the native email app.

Just don’t use it to embarrass your clients. Unless you were right, and you’re just making sure they know.

In case you’ve been buried under a rock, Virtual Reality is all the rage this year. Yep, if you didn’t run across a friend or family member with one, you didn’t get to experience the thrill and awe that was the 90 second preview for Assassin’s Creed. I jest, because it was awesome.

Google Cardboard may not be Oculus Rift-level virtual reality, but it’s also available now and not $600. So what is Cardboard Camera? Its a tool to let you take a panoramic still image. Then, it lets you get inside of the image. Yep, immerse yourself in a full 360 degree environment, with ambient sound taken with the photo. Just to make sure all the bases are covered, the image adds visual texture to create a 3D feel for users.

As a lawyer, can you think of a reason you’d want to be able to immerse someone in a photo? Me too.

Just as with the Starship Enterprise, I am on a continuing mission. Sadly, not nearly as cool, though. My mission is about replacing the legal pad. Paperback is one potential stepping stone in that direction.

Note taking apps are all the rage, so to set themselves apart, they need to have useful features. A lot are trying, Paperback found some good ones: easy access, intuitive design, and the ability to export directly to Evernote. If you are the type who takes “Post-It” style notes, this is an app to try.

So, does your law firm have a plan to become more efficient? Well, if you’re looking for one, one of the best ways to shave the expenses you pass on to your client is by using video conferencing. No travel for depositions, no flights for mediation. For less than $100, you can conduct the face-to-face meeting that would have cost thousands.

When was the last time that someone returned one of your phone calls… and you had no freaking clue why you called them in the first place? If you say anything other than “within the last couple of days,” you’re either lying or you don’t talk to anyone. Contact management is one of the more neglected elements of the modern law firm, and returning calls is just one part.

Connections, the latest from the Microsoft Garage Project, has a lot of little tools to help. The primary feature of Connections is the post-it style notes that allow you to capture and track interactions with your contacts right in your contact app. You can set reminders, notify yourself of scheduled follow-up appointments, and send messages via any number of third-party messaging apps (including the ones that offer end-to-end encryption).

But most importantly, the last note you wrote will appear on your phone when your contact returns your call!

As I said earlier, I HATE to-do lists. Habitica may cause me to change my mind.

What does it do? Well, it first asks you to create a to-do list. Do this. Then it wants you to input your habits and your daily goals. Don’t be shy, input everything. Every little task and goal. Then… it asks you to pick your avatar. Not weird like the movie Avatar. Awesome, like a fantasy role playing character.

That’s right, your character progresses as you complete tasks on your to-do list. And it’s free. If you’re not at least willing to try it…

Windows Phone apps begin at the (29:11) mark of the podcast.

Yet another attempt to eliminate the legal pad, Action Note allows you to create notes directly from your phone’s Action Center. From there you can add tags, and even add images to the notes. Highly customizable, the real prize of Action Note requires that $3 payment – cross-platform synchronization with any Windows 10 devices!

While not a world-changer, this is a great app for lawyers who use Windows 10.