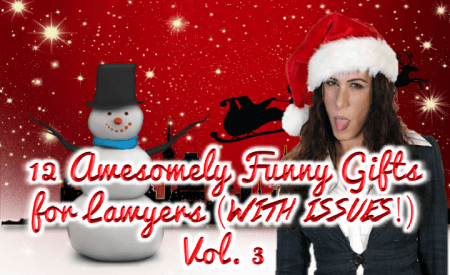 Once again, we find ourselves approaching that most joyous of holidays – Full Contact Shopping Friday! We should all stop at least once, allowing our aggressive consumerism to rest for a moment, and realize that we’re supposed to be buying things for other people.

With that in mind, you’ve likely made your way to this post because one of the people you’re buying for is a lawyer. Or you need a good laugh. Either way, I present to you my third annual “12 Awesomely Funny Gifts for Lawyers (with Issues!)”: 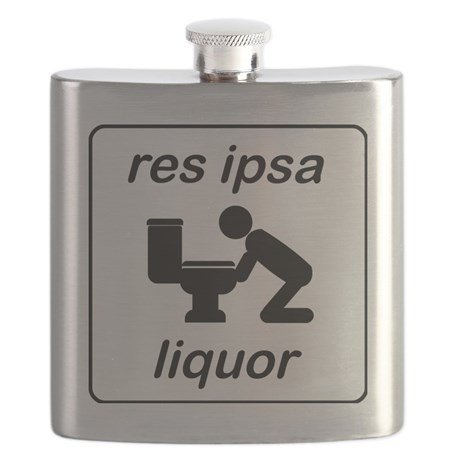 So there are those interesting times when you need a drink. You know them well, I assume. Those times when liquor is absolutely called for, but for whatever reason, “polite” society has deemed them inappropriate for drinking. Like in church.

Or in the middle of a trial. An important one. That’s being televised.

So make like it’s Prohibition all over again with this helpful stainless steel flask. It’ll hold 6 ounces of your favorite tummy-warming beverage (aka Moonshine), with a helpful leak-preventing cap. You wouldn’t want to waste any of that precious liquid (or give the bailiff cause to investigate the “moderate odor of alcohol.” And just in case you’ve consumed too much, there’s a helpful instructional diagram right on the flask for what you should do!

The thing drinks for itself! (A derivative of Descartes’ “I drink therefore I am.“) 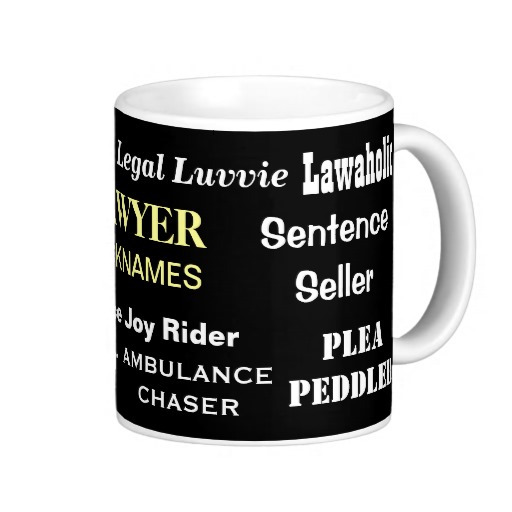 Sometimes, you’re sitting in a public place, and someone nearby shouts some kind of epithet at you, but you’re not really sure if they’re mocking you or the person next to you. It happens. They could be using a particular derogatory term that you might not have heard before.

Regardless, you hardly want to be caught unawares when someone is insulting you, potentially giving you the proper opportunity to utilize gift idea #12 on this list. You need to be ready!

That’s where this mug comes in handy! If you’re not sure the catcall from the unruly gentleman outside the restaurant is gesturing in your direction between banging on the window and pulling his own hair out, consult the mug!

And since it turns out that “Justice Joy Rider” is an insulting term for an attorney, put on your dueling hat!

(Oh, and the mug holds hot liquid, and other mug-like stuff.)

For a less cordial, but more educational mug, check out the Emphatic (Expletive) Grammar Lesson Mug

(affiliate link), which is just profane enough that I can’t include an image. 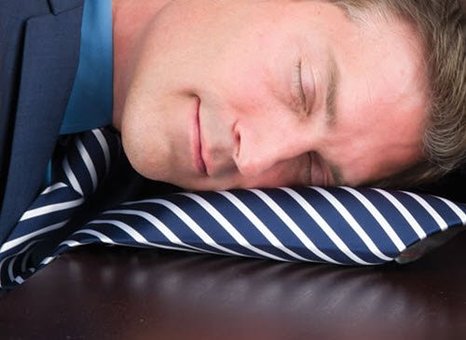 Face it, we’ve all had to deal with the unsightly crease marks that appear on our faces after we take an unscheduled nap, head resting on our arm. Explaining why you have a perfect representation of your wristwatch on your forehead is never easy.

If you’re wearing this necktie, though, problem solved! (Well, the creases on your face problem anyway. The whole “you sleeping at work” problem is another bag of worms.)

Pull out the tube, inflate your necktie, and you’re off to dreamland! However, drool on yourself, you’re on your own. 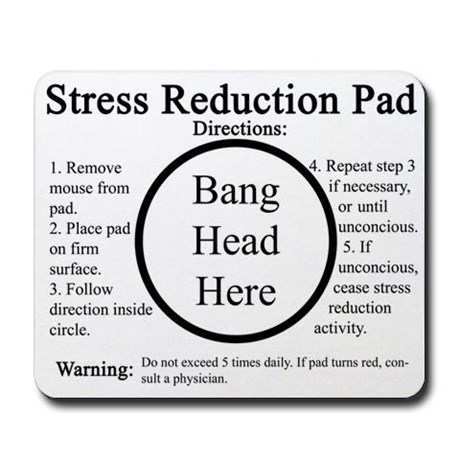 We are quite a stressed out profession. How stressed? Well, this is a technology site, and even I decided we all needed some serious meditation. Honestly though, if you haven’t done the guided meditation on that podcast, do it now. Just skip ahead to the 30:00 mark, it’ll totally change your day.

Anyway… we all need to relieve stress in unique ways. One of those methods, adopted by this mouse pad, is to limit your brain’s ability to recall periods of stress (or of anything, really). Simply follow the instructions, and you’ll be stress free in a matter of minutes.

(IMPORTANT: Failure to follow the advice in the “Warning” could lead to you making a real mess in your office.)

Oh, and the mouse pad itself, it’s designed to be optical-friendly, with high-quality nonslip rubber on the back. Oh, and in the event the warning is ever necessary, it’s machine washable too!

There are times when you really need to indicate your displeasure with someone AND keep the papers on your desk from flying away. Some might suggest certain types of therapy, but I think this Bobble-Head reminiscent middle finger paperweight does the trick just fine.

All you need to do is set this paperweight in your office, probably on a stack of papers (in case anyone asks), and direct it to the spot you feel most in need of understanding how much you don’t give a f*ck. Then, when the point needs emphasis, give the hand a little tap, and watch it (and anyone else in your office) just bobble away! 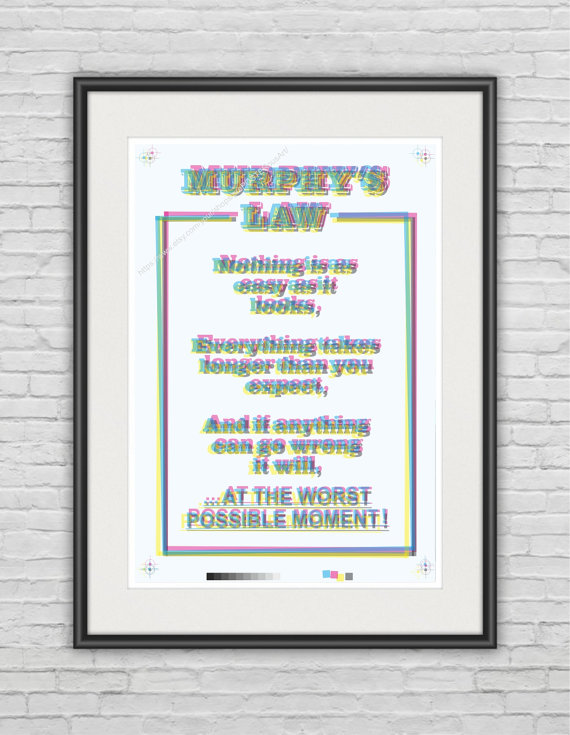 “… if anything can go wrong, it will… at the worst possible moment.”

It’s important positive, optimistic philosophy, roughly on par with the concept of entropy as explained by George Carlin.

And your clients should know about it too. This office decoration, proudly displayed in your office lobby, will perform two essential tasks: 1) it’ll allow your prospective clients to develop more reasonable expectations for their case, and 2) completely disorient them to their surroundings!

I have to admit, this one has me a little concerned. Not because it’s kind of silly and childish-sounding. To me, that only serves to increase its appeal. No, this one concerns me because I can see a lot of lawyers actually displaying this kind of thing proudly, and without the appropriate sense of irony.

However, the 3rd grade language level is pretty amazing. This gift’s non-monetary value increases dramatically in direct proportion to the age, relative prestige, and “old-fogey”-ness of the attorney on whose desk it sits.

So, if you get the senior partner in a BigLaw firm for Secret Santa, you know what to do!

However, since this nice childish version didn’t come in a “Because it’s 2015” mode…

… I have decided to include a couple additional options:

She Who Must Be Obeyed Desk Plate

The WOMAN In Charge Desk Plate

… and the gender neutral:

8) The Dictionary of Legal Bullshit

Our profession is a descendant, in part, of the scriveners, those who wrote stuff down. Scriveners, as it turns out, got paid by the word. And you thought the billable hour inhibited efficiency!

Getting to the bottom of legal jargon is pretty tough for the general population. Let’s be honest, it’s not always that easy for us lawyers, particularly once we’ve finally completely re-trained ourselves to speak like normal humans after the ritual indoctrination known as “law school.” So this amazing book helps translate those old, archaic terms into words and phrases regular people understand. For example:

Res ipsa loquitor = “Duh.”
Res judicata = “You lost, get over it.”
Respondeat superior = “Sue the one with the most money.”

Skills come in all shapes and sizes. So if you know a lawyer who may not necessarily be the best advocate, but they have mean skills on the Atlantic City boardwalk, this is damn near the perfect gift.

But it’s not just for the Skee-Ball enthusiasts like Holden McNeil. 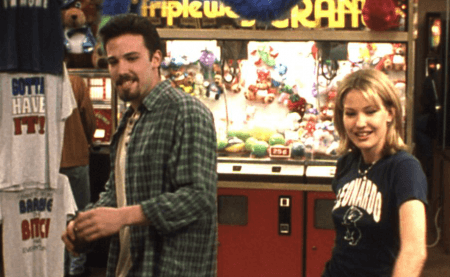 Here’s Mr. McNeil, right after comparing Skee-Ball to a date rape drug… and not getting slapped for it.

Anyone can enjoy this little office game. Seriously, it’s a 2 lb. toy that shoots a metal ball from a spring-powered launcher. If you don’t know anyone who would love to have one of these, I assume you probably also hate puppies and freedom.

Want to make a lawyer laugh and cry at the same time (without brandishing a weapon)? Then this just might be the perfect gift! One big metal tin containing six different bottles of hot sauce, this is quite a gift. Along with the tin, you’ll get nearly 3 full pints of hot sauce, in six lawyerly varieties:

This stuff is legit.

Truly, who doesn’t want a drone? They’re awesome! You get to have a toy that absolutely everyone around you hates (for good reason). If they’re annoying enough, you can pull a Top Gun, and buzz them while they’re cutting the grass or, in the case of a law office, deeply focused on something important.

But face it, we’re way past wanting basic drones. That’s where the Discovery HD+ drone comes in handy!

And it comes with a video camera. And software to upload your videos right to Facebook.

Unfortunately, it’s not live streaming video. So when your neighbor shoots down the drone with a shotgun, you’re not going to be able to broadcast the video of him doing it all over the internet. Yet.

So you have the potential to terrorize the office with a video drone. How to respond? Good thing the next thing on the list is the…

If you’re anything like me (and if you’re reading this post, you are), your current thoughts are something between “You’ve got to be kidding me” and “Where the hell was this thing when I was a kid?!?”

The TerraDrone is a Remote Controlled robot. Designed to handle numerous types of terrain, it’s six legs provide the stability and speed you’ll need. To deliver its payload. The TerraDrone fires up to 12 darts, at a range of 45 feet, from it’s swivel-mounted turret (also remote controlled). With adjustable blast angle, the turret rotates 360 degrees, so you’ll never need to re-position just to hit a different target.

I am sensitive, however, to the growing concerns about drone warfare taking the human element out of battle. If you’re not yet mentally prepared to have a robot fight your battles for you, fear not! Nerf has made a Squad Automatic Weapon (a.k.a. SAW) just for you!

The Elite Rhino-Fire Blaster fires darts from two alternating motorized barrels, each drawing from an ammo drum of 25 darts. Worried about steady shots? A removable tripod’s got you covered! And for tactically advancing on the enemy position, dual handles let you fire while on the move. Those idiots in the M&A department won’t know what hit ‘em!

In case you still have doubts, check out the Rhino-Fire Blaster in action:

You might have noticed some of the links above are identified as “Affiliate Links.” This does not, generally speaking, make them evil. What it means is that when you click on the link and purchase the product, I receive a (very) small commission. You DO NOT pay any extra as a result. I do not include these links capriciously, and I research each link I include on this list. I only include products on this list that I find particularly hilarious. I do not provide any warranty as to their use, this page is, as the title clearly says, about funny and/or sarcastic gifts.

For additional information, check out our Disclaimers page.