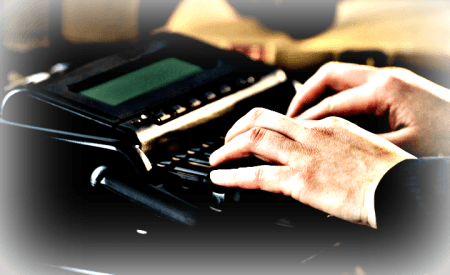 Last week I had the (good?) fortune to attend two depositions spanning three days in a construction defect case. We represent a fairly peripheral sub-contractor, so despite exceeding 2o total hours, I didn’t get the opportunity to ask a single question. However, we’re not so peripheral that I could completely space out.

Over the course of three days, which included the introduction of about 100 exhibits (I’m impressed at the plaintiff’s counsel’s restraint, except when you consider that many exhibits exceeded 250 pages each), I listened intently. Or as intently as possible.

Until the other part of my brain, the part that writes this blog, kicked in. I analyzed what I thought was an intelligent, if complicated, system put in place that uses Dropbox for sharing exhibits. But that was really it. No video, no digital exhibits, remote participants listening by phone. I couldn’t help but think that there had to be a better way than this.

These ideas, in and of themselves, are not new. Some are even widely implemented in some jurisdictions. But their use is certainly not widespread or universal. Here are 4 High Tech Ways  to Improve Your Depositions:

The depositions I attended were not videotaped. Personally, I do not understand why anyone wouldn’t record video of a deposition – there are so many benefits. Whether your court reporting service has a videographer, or your paralegal operates a camcorder, you should videotape your depositions.

However, I’ve recently learned of a new practice by some court reporter videographers. They use multiple cameras, one trained on the witness, and the other trained on a designated location for an exhibit, which means that the exhibit would be captured as well. Sounded great, until I learned that the videographer only recorded one feed.

As soon as the witness started reviewing an exhibit, the cameras switched, and the camera trained on the witness was no longer recording. If this had happened to a deposition I’d ordered, I probably would have thrown my computer at something. Watching a witness’s reaction to an exhibit is one of the reasons I record depositions.

But that got me thinking – what if you used multiple cameras and recorded multiple feeds. It’s not really that difficult to set up and doesn’t cost any more if you already have the cameras (you can use software like Final Cut Pro X

to put them together). You also wouldn’t need to have all of them recording. What would be the ideal setup, I asked myself? Here’s what I would do:

We’ve all been a part of those depositions where a witness needs to use multiple colored pens or highlighters just to mark the same three spots on a map – “for the record.” Well, if you have a video recording of the interaction, you can reduce the confusion! 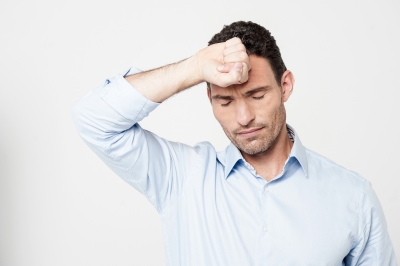 Why did I ask that witness to label the same wall with three different colors?

And for Pete’s sake, record all of the feeds. What is the point in recording a deposition if it isn’t continuous. You want to capture all of a witness’s reactions. Not just the ones he makes when you ask him a personal question.

2) Use a tablet for digital deposition exhibits

The depositions that I attended dealt with a lot of information in exhibit form. There were construction drawings, contracts, marketing information, and emails (… endless emails). Some of the contracts were in excess of 250 pages. Plus, any time either the questioner or the witness needed to refer to an earlier exhibit, it was a 2-5 minute, off-the-record search through the previous exhibits.

Instead, the witness should have been given a tablet. The exhibits were already in digital form, accessible via Dropbox link, so the most tedious task was already complete. Since no documents could be admitted that weren’t made available via that Dropbox link prior to the deposition, there was nothing preventing the deposition from being entirely digital.

Except that nobody thought of giving the witness a damn iPad.

With a tablet, the witness could have easily flipped back and forth through different exhibits, made annotations (that are saved and preserved for the record), and been directed to important sections in the document.

of the tablet’s display could be made part of the record, completely eliminating the need for a camera to record the exhibits. Synced up with video of the witness, you’d have a visual record of each exhibit the witness was looking at available for every exhibit.

3) Use a projector to display large/detail-intensive exhibits

Construction drawings may be the bane of my existence in cases like this. Architects and general contractors LOVE their 4×3 foot drawings, full of minute details and micro-printing. Try to present them as an 8.5 x 11 image, and you’re not able to read any of the critical measurements or instructions.

The other option, everyone gets up and hovers around a big, cumbersome exhibit, as though it were a strategy map from World War 2. 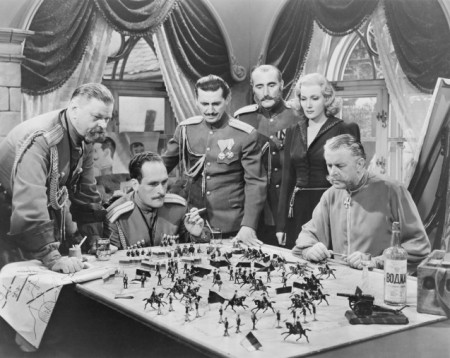 At least somebody brought the Vodka!

Forget receiving a copy of this exhibit with your deposition transcript, there’s just no way for it to work. So what’s the alternative? Use a projector

to display the image on a screen or wall.

While PDF documents are usually thought of in 8.5 x 11 format, there’s no reason they have to be that way. Convert a large document to a large PDF and throw it up via projector. A few immediate benefits: 1) no more cramming around a table trying to see the drawings, 2) the exhibit can be disseminated to all the parties in a readable format, and 3) a camera or video feed set up to record what the projector displays means the exhibit is part of the visual record!

If you need to annotate a large exhibit, the same annotation tools you use for regular exhibits should have no problem adding those same markings, factored for size, in a high-resolution exhibit while it’s being displayed. Just zoom in, make your markings, and zoom back out.

What if you have, for whatever reason, paper exhibits. Well, if you have a projector with an Elmo, problem solved. But I have to ask you: if you’re projecting it, why not also record it?

With these two devices – a tablet and a projector – we have essentially eliminated the need for paper exhibits. COMPLETELY!

So there came a time during one of the depositions when I needed to return to my office on another matter, but still needed to be involved with the deposition. Several other attorneys were participating remotely via phone, so I joined that group and listened in.

I haven’t had to do that in a while, and I forgot how terrible it is. First, it’s not always easy to tell who’s speaking. Second, whomever is slightly louder sets the volume tolerance threshold, meaning it’s almost a guarantee you’re not going to completely understand either the questions or the answers. 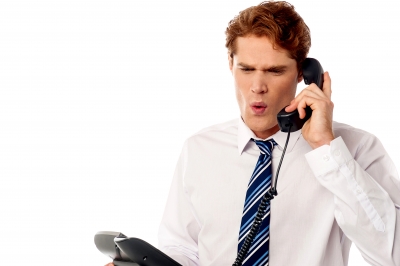 But mostly, it’s freaking boring! Even if you’re only peripherally involved in a certain aspect of the case, when you attend a deposition, you should at least pay some attention to what’s going on. At some point for me, that became damn near impossible (among my problems, I was pretty sure two different attorneys examined the witness – it was only one).

The only real difference between attending a deposition by phone and reading a transcript is adding your garbled voice to the chorus of “object to the form.” Even if you’re asking questions, it’s difficult to tell whether you’re communicating clearly, and for any examination beyond minor issues or very narrow topics, pretty ineffective.

You lose out on the benefits of participating in the deposition. Observing the witness is one of the essential components of taking an effective deposition. Being able to participate in a deposition over live video solves all of these problems.

By viewing the deposition, you’re naturally more engaged with the subject. You’re also able to observe how the witness reacts to questions and interacts with exhibits.

As I said at the beginning, none of these suggestions is, in and of itself, novel. Many of them are used to some degree in many jurisdictions. Yet, in a deposition in a well established North Carolina firm, with more than 20 parties (oh, the lawyers!), none of them were fully implemented for three days’ worth of testimony.

While they may not be major solutions to global problems, these four changes could go a long way to making depositions, litigation generally, and the practice of law as a whole, more efficient, less wasteful, and, I believe, happier people. Especially the ones sitting in a deposition on Good Friday.

Photo by stockimages at FreeDigitalPhotos.net