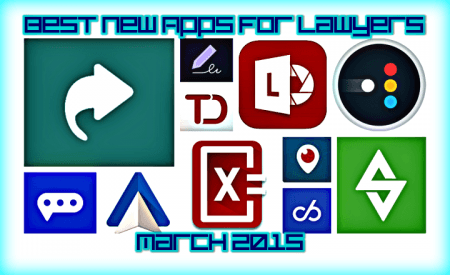 Well, the Madness of March has come and gone. I’m sure most of you, like me, had your brackets obliterated early on (much appreciated, Iowa State and Virginia), and only the random guy from Wisconsin in your office is even getting points for the championship game. In addition, it was also another great month for apps. I had to leave off several pretty cool apps.

Here are my best new apps for lawyers released in March 2015:

Technically, Caliber is not a new app. It was released last year, and this version is technically Caliber 2.0. But Caliber IS a new app, completely redesigned, and definitely worthwhile. And the updated version seems as though it was designed with attorneys in mind.

Caliber is a contacts app that connects with your LinkedIn profile (the most popular social network for lawyers by far), and imports your contacts. Once that’s done, Caliber asks you for your interests, and begins suggesting relevant professionals you might want to connect with. What happens next really should be a lesson for LinkedIn.

If the person you want to connect with has Caliber, the invitation will appear in the app. If not, it’ll go through LinkedIn. If they respond, you get added to their contacts. Caliber even offers a limited text system that many will find more convenient than LinkedIn’s InMail.

Unless you either live under a rock or spent the last month in depositions in construction defect cases (like me), you’ve by now heard about the app sensation Meerkat. Although there’s a decent chance you have no idea what it does.

Meerkat is an app designed for live streaming video. From your mobile device, to anywhere in the world. One major downside, there isn’t a full Android version yet. And although Meerkat has already been proclaimed as the industry leader, I don’t think you can lead anything without Android capability. Which Stre.am has.

Stream directly from your smartphone, and comment on other users’ streams. Get notifications when people are live, and search and view events all over the world – as they happen – right from the ground.

It seems no matter what I do to try and push for a paperless office, my old enemy – the legal pad – gets in the way. One of my most recent issues has been dealing with handwritten notes, both mine and those of other attorneys in my office. I need to save them, but I don’t want to keep the paper. I suppose I could just scan them, or…

Using Office Lens, I can take a photo of the notes, which the app immediately converts into an editable format. And not just any editable format, but a Microsoft Word document. With modes to capture images, business cards, documents, and even whiteboard notes, you’ll always be able to turn your notes into a workable digital format.

Like Stre.am, discussed above, Periscope is a live broadcast app that allows you to record or view live video from around the world. Like Meerkat, Periscope has launched for iOS only. Unlike Meerkat, it has Twitter behind it.

Broadcast to your followers worldwide, who are immediately notified that you are live. They can join and comment on your broadcast in real time, which could be a remarkable new element to Twitter Chats, if you use them (you should). Allow your followers to replay your broadcast for up to 24 hours and, most importantly to attorneys, restrict access to any broadcast to as few people as you’d like.

ToDoist has long been one of the top to-do list apps available for mobile devices. Well, they recently decided to perform a major overhaul of their app, and the results are impressive. First, they’ve completely re-worked their task-entry system. Instead of typing in your task, then tapping through a few options, and a few more to set the due date, ToDoist will recognize all those elements from your text entry and assign the date and assign to a project itself.

Other new features include improved voice recognition for task entry, the ability to assign start and end dates to tasks, expandable and collapsable list views, and multi-item editing or deleting. Mark tasks as complete with a swipe of your finger, and modify priority settings from the main screen. All updates that dramatically improve the efficiency of the ToDoist platform.

The larger my contact list gets, the harder it is to know for sure that the information I have is accurate. The first few years out of law school there were probably 100-200 people that I tried to keep in touch with. Back then, it was much less likely that people were moving around, preferring to at least learn a little bit at their new firms.

Not so today. Now the list is over 500, and I pretty much expect that about 20-30% of the list is no longer accurate. CircleBack is designed to solve that problem. The app, designed to be an always-accurate address book, constantly monitors your contacts across devices and networks, notifying you of any changes.

The app connects to Gmail, Outlook, Twitter, and Facebook. It will even scan business cards and email signatures of your contacts. If it detects a change, it will notify you and ask to apply changes.

The human signature is one of the great menaces of a paperless law office. No matter what you do to avoid it, you can’t get rid of those papers needing a signature. Even if you have a PDF stamp on your computer, you’re frequently given documents to sign that, inevitably, end up in your office in paper form.

Adobe may have just gone a long way towards solving that problem! Using your Android device, you can fill and sign any form. Handed a paper document? Snap a picture, and with a few taps, you’ve entered your initials, checked the appropriate boxes, signed the document, and emailed it to everyone who needed it.

One of the realities of the modern world is that no matter how many people we connect with on a regular basis, there are dozens of ways to connect. Drupe is an app that combines your connections with your communicators in one place.

Find the contact you’re trying to reach, then swipe that contact to the app you’d like to use to connect. Call, text message, email, WhatsApp, Skype, Facebook Messenger, Google Hangouts, and a ton more communications apps are available, customizable based on what you use. Track your recent communications log for all your apps in one place, and even communicate with groups for conference calls or mass emails.

Ever been in the car and realized that you needed something on your phone? I know, stupid question. Regardless how adept we may have all become at using our smartphones without inflicting mass casualties to those around us, it remains remarkably unsafe to use your phone for anything while you’re driving.

Google wants to change that (until its autonomous cars take over, that is) with Android Auto. Simply connect your Android device to your car, and suddenly you have all the benefits of your smartphone with none of the senseless death! Navigation with Google Maps, including turn-by-turn navigation, lane guidance, traffic conditions, and more. Make calls and send text messages, get information assistance.

So, how many of you lawyers out there are any good at math. Most of those who just claimed they were are lying. The rest of you know exactly how inept attorneys are at math. So even though I throw this one in because I think it’s funny, this app could actually be remarkably useful for attorneys.

Do you see a difficult math problem in front of you? Take your phone, take a picture, and PhotoMath solves it. Want to learn something? It’ll show you the steps. Go ahead, tell me you wouldn’t use this thing ALL THE TIME.

Oh, and as a bonus, they’ve issued a challenge to find math problems the app can’t solve.

Quick, make a mental list of all the things you use your smartphone for on a daily basis. If you’re like my wife, one of them is setting a cell phone alarm for the next morning, even though I have an alarm clock. Do you check the weather in the morning? Send a text when you leave work?

Simplify takes those actions and brings them to your home screen. Creating a new icon for each action, you are able to perform all of those tasks in one click thanks to Simplify.