4 Reasons the Comcast-TWC Merger is Bad for Everyone 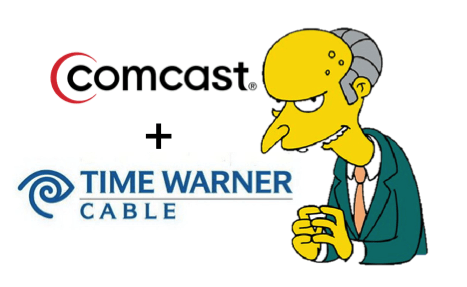 By now, you’ve all heard about it. Comcast is “merging” with Time Warner Cable (“merging” is what they call it when they buy the other company with Comcast stock instead of Comcast’s cash). The deal is reportedly valued around $45 billion, and the deal is expected to be complete by the end of the year.

Given the immense publicity of the merger in the 12 hours since the news was reported, the FCC’s review will need to seem competent. Comcast will make the same arguments: economies of scale, increased competition, and financial savings, etc. Yet just like their promise to be at your house between 8 and noon, you should be very skeptical.

Comcast caps the amount of data users can download, charging considerable fees when those caps are exceeded. It should be no surprise that using streaming video services like Netflix and Hulu dramatically increase the amount of data consumed, increasing the likelihood that users of those services will incur extra fees. Except, if you use Comcast’s Xfinity service to watch the same videos, it never counts against your cap. So if you have Comcast, your cost for using any streaming video service other than Xfinity must also factor for your data threshold fees.

Additionally, Netflix has produced considerable evidence that Comcast has actually been throttling the internet speed for anyone using Netflix for streaming video. In fact, of all the major ISPs, Comcast comes in dead last for average download speed for Netflix services – and despite Comcast’s claims of rapid technological improvement, the average download speed on Comcast’s service has actually gone down – from 2.17 MBPS in November 2012 to 1.51 MBPS in January 2014.

One commentator called it “a sterling example of how an ISP doesn’t have to actually block or downgrade anything to nudge customers toward its preferred services.”

Comcast’s press release highlighted their deal to follow the FCC’s Open Internet order. As part of their purchase of NBC-Universal, Comcast agreed to be bound by the rules, regardless of judicial determination of their validity, through 2018. However, the release fails to mention that Comcast has never considered throttling or data caps to violate net neutrality. In fact, Comcast was practicing both for years prior to the recent court ruling.

The Comcast-TWC Merger gives the company control of 30% or more of the broadband internet market, and up to 50% of the bundled tv-internet-phone market. Using control of the broadband market to give unfair advantages to peripheral services owned by Comcast is anticompetitive, and allowing this merger will only increase their effects. Moreover, apparently even Comcast now admits that subscribers won’t reap any major benefits:

2) The Comcast-TWC merger strengthens the existing system dominated by local and regional monopolies.

One of the biggest reasons why the Comcast-TWC merger ties in so closely with the debate about net neutrality is the staggering lack of competition in the cable television and broadband ISP business. In most places in the country, you have only one choice for cable television and/or high-speed internet. Satellite services like Dish Network and DirecTV, while certainly influential, have limited reach compared to the infrastructure created by the cable companies.

Unless  you’re fortunate enough to live in one of the few cities served by Verizon ViOS or Google Fiber, you probably have no option other than your local cable company for high speed internet. It’s almost humorous that Comcast actually argues that since they don’t compete with TWC in any cable market, there will be no impact on competition. What the spokesperson left out was the fact that neither Comcast or TWC have cable or broadband ISP competition in nearly all of their markets!

Justifying expanding two giant monopolies into a “behemoth” monopoly by suggesting that competition won’t be affected is plainly ludicrous. Moreover, it will push the remaining cable and broadband ISP providers to seek similarly-styled local and regional monopolies. Exactly what a competitive market economy looks for!

Data caps for high speed internet are, in my opinion, ridiculous. They might be acceptable if there was any actual basis for imposing them. However, there is no actual “congestion” or infrastructure basis for the caps. They mostly serve to limit competition (through exemption). If the caps were really about capacity, Comcast wouldn’t exempt their own video service from the caps.

What about the data caps on cell phones? NOT the same. Competition between wireless providers means both quality of service and price point are key means of winning customers (just check out T-Mobile’s recent ads), reducing the chance the caps will be arbitrary. Broadband ISPs, on the other hand, have no direct competition for most of the U.S. Moreover, the lack of competition has allowed ISPs to avoid spending money improving the infrastructure of their networks. That’s how we get some of the worst, yet most expensive, internet access in the developed world.

Competition between wireless providers resulted in Verizon announcing that it was reducing prices and increasing data limits – a result of competing with T-Mobile – just hours before the Comcast-TWC merger was announced. When was the last time you saw that from a cable company?

Instead, data caps like those used by Comcast – which allow companies to profit by neglecting their own system – will likely become more prevalent.

4) Combined with other activities, the Comcast-TWC merger will increase the barriers to entry for new competitors and curtail meaningful innovation.

None of this merger talk would have gotten me so riled up if I hadn’t recently read this article about two pieces of legislation introduced in Kansas and Utah, respectively. The bills would effectively prevent any municipality from building  their own high-speed internet or public WiFi service. At least 22 states already have some version of the law in place,  passed at the urging of the telecommunications industry (with Comcast and TWC being MAJOR contributors) and written mostly by the ultra-right wing American Legislative Exchange Council.

These laws are usually subtle, but also usually ridiculous. (E.g., in Alabama, a city cannot make any capital investments in a high speed internet service unless it’s service is showing a profit. Hard to show a profit from a fiber optic network when you can’t spend the money to BUILD the fiber optic network!) Most of the laws even extend restrictions to initiatives that involve public and private cooperation.

How many companies have the capital necessary to compete with established ISPs without agreements with local governments? Even Google has only set up systems in Kansas City and Austin. (Google has gone so far as to say increasing broadband ISP competition is virtually impossible relying on private investment alone.)

The lesson? The barrier to entry into the market by ANY competitor is enormous. Many companies have abandoned the idea of competing in this field, and those that try will run into an even bigger company already entrenched.  Even if net neutrality is restored (and actually enforced), this merger will dramatically reduce competition and significantly limit innovation.

I expect the merger to eventually be approved. In my opinion, we all lose.